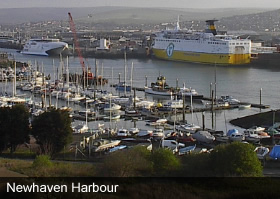 In the 1580s a storm changed the course of the River Ouse so that it entered the sea at what is now known as Newhaven, and not at its original estuary at Seaford. Under an Act of Parliament in 1626, Commissioners were appointed by the Crown and were effectively the first Harbour Authority. There are references to further Acts in 1730, 1783 and 1790 concerning the development of the Harbour, the limits of which were then from Lewes to the Sea. Newhaven first had its links with Dieppe as a ferry port in 1825.

The Newhaven Harbour and Ouse Lower Navigation Act of 1847 saw the London, Brighton and South Coast Railway Company (L.B.&S.C.) incorporated as the Authority, and this act was enacted at the same time as the Harbours,Docks and Piers Clauses Act of 1847, the founder of National Legislation for Ports.

The Newhaven Harbour and Ouse Lower Navigation Act of 1863 enabled the North Quay Cut to be made linking the upper reaches of the harbour with the lower in a straight line to the east of Denton Island. The old section of the river around Denton Island ceased to be part of the navigable river and became known as the “Old Arm” and the Act relieved the Harbour Commissioners of all liability for repair and maintenance of it. It was about this time that the French “Western Railway” became partners with the L.B. & S.C. Railway Co. and the joint ownership of the Newhaven-Dieppe ferry route was commenced.

While Newhaven was a railway-owned port, many shipping lines were using the facilities of the East Quay and Railway Quay, in fact, figures for 1863 show over 1000 vessels used the port. With the opening of North Quay in the years that followed, this number could only increase. 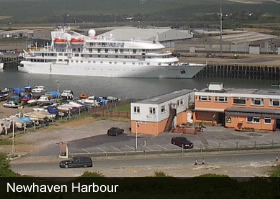 The Newhaven Harbour Act of 1878 formed the Newhaven Harbour Company and defined the Harbour Limits as from the Horseshoe Sluice ( approximately 350 metres north of the North Quay turning basin) to an imaginary straight line drawn from a point 100 yards south of the West Breakwater to the southern end of the Buckle Groin in the parish of Bishopstone. The Act enabled the construction of the said West Breakwater. The Old Arm of the river fell into these harbour limits, but there was still no liability to maintain that portion of the river. Extensions to the commercial East Quay were carried out around this time

In 1984, the port was privatised, and purchased by Sea Containers Ltd who maintained the name Sealink as the statutory harbour authority until 1991 when Sealink British Ferries was sold to the Swedish company Stena. Under The Sealink (Transfer of Newhaven Harbour) Harbour Revision Order 1991, the powers of the Harbour Authority passed to Newhaven Port & Properties Ltd, a division of Sea Containers. In June 2001, Sea Containers sold Newhaven to the present day French parent body, but Newhaven Port & Properties Ltd. is a UK registered company and is still the Statutory Harbour Authority.

The Newhaven Harbour Revision Order 2016 extended the harbour limits to 2 miles out to sea to the SW and 1.6 miles out to the SSE. The Order also gave the Harbour Authority the powers of General Direction.