Could this be the future for Seaford?

For answers, and an opportunity to make your voice heard, come to a meeting at 7p.m. on Friday 24th October at the Clinton Centre, Clinton Place, Seaford.

Last winter a series of bad storms removed much of the shingle from the beach and hence removed a large part of Seaford’s sea defences. 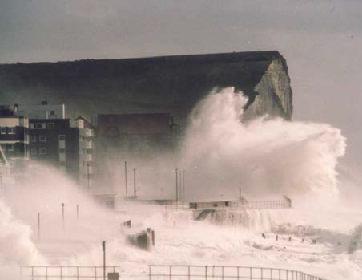 Flood warnings were issued to some residents. Fortunately, the series of storms did not continue and there was no serious flooding.

Newhaven was not so lucky as 50 houses and 10 business premises were flooded. More worryingly, the railway line was closed for nearly four days. with over £1millon damage to signalling equipment. .

Seaford was protected by the shingle beach which has to be maintained, at an annual cost of £300,000, by the Environment Agency’s contractors moving large amounts of shingle.

Last winter, many other parts of the country suffered serious flooding and there were widespread demands for more money to be spent on flood defences. We can expect much pressure to reduce the money spent on Seaford’s flood defences in future

Sea levels are presently rising and climate change will accelerate this. The frequency and severity of storms that hit our coasts will greatly increase flood risk. .

Seaford, Newhaven, the Ouse Valley and Lewes have been fortunate in being part of a project co-funded by the European Union (known as Coastal Communities Project 2150). The project looked at the impact of rising sea levels and the increased risk of more frequent storm surges. Options were developed by the project team to illustrate different ways of adapting to the increased risks of flooding. The traditional approaches of building higher sea walls and river banks will not always be sustainable in the future.

Arrangements have been made for four key speakers to give presentations and answer questions at a meeting on 24th October. They will cover:

This is an important subject for the future of Seaford, (and Newhaven) and you are encouraged to attend and make your voice heard.